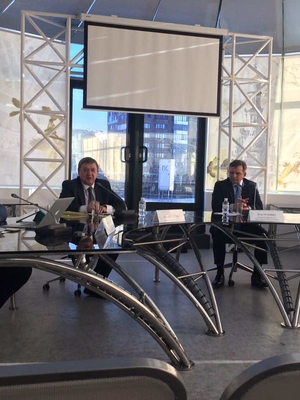 On the 13 th of December the International Bleyzer Foundation held a round table meeting dedicated to “2016 Economic Results. Risks, Challenges, and Prospects for 2017”. Will the sluggish growth evidenced in 2016 accelerate in 2017? What conditions would be necessary for such acceleration? Economic outcome of the procrastinating restoration of the Ukrainian economy: unemployment, low living standards, and the outflow of migrants. Budgetary policy: potential fiscal deficit reduction. Cost optimization. Profit-related risks. Prospective decrease of the shadow economy. Changes in Ukraine’s trade flows. Low investment activities: risks and possible recovery. In order to discuss these issues and more, there have been invited such leading Ukrainian economy experts as Oleg Ustenko, economist and executive director of the International Bleyzer Foundation; Vasyl Yurchyshyn, economist and director of economic programs at Razumkov Center; Erik Nayman, economist and managing partner of Capital Times; and Viktor Suslov, economist and former Minister of the Economy of Ukraine.

According to experts, 2016 was no watershed year for the Ukrainian economy. The rate of the country’s economic growth in 2016 won’t exceed 1,5%. Since experts forecast the GDP growth for 2017 around 2%, it becomes obvious that there is still a long way to go to reach the level of 2013. In 2014-2015, the economy dropped by 17,5% with no ability to recover throughout 2016. Moreover, the insignificant growth in 2017 won’t compensate for it and will simply expand the scale of the country’s lagging behind the world economy.

Oleg Ustenko: “Obviously, in 2016 internal consumption was minimized, households had scant leeway, and reserve funds have been used up. Inflation elevated significantly since 2014 and by the end of 2016. Consumer prices doubled. Yet, there is some positive dynamics too. According to our estimates, by the end of 2016 inflation will not exceed 15%. In 2017 its rates will be relevantly high comparing to the countries of Central and Western Europe, yet significantly lower than in 2014-2016 – ca. 10%. We also expect revitalization of lending. The inflow of foreign direct investments in 2016 was insignificant – around USD 3–4 billion. Moreover, 2/3 of this amount was directed to the banking sector, whereas the economy sector, which needs at least USD 5 bn. a year for the sector of agriculture, received only USD 1 billion.”

Experts came to an agreement that the foreign investments inflow is unlikely to revive in 2017 against the background of weak progress in structural reforms. In order to attract potential investors, the country must have a low risk profile and offer high return on the invested capital. Unfortunately, Ukraine is a high-risk country for investors today, despite the fact that several international ratings fixed some progress.

Experts emphasize the necessity to ensure sustainable economic growth at the level not less than 5%. Ukraine is stuck, so to say, in a double corner now: on the one hand, in order to fight poverty its growth rate needs to be at least 5%; on the other hand, there is a dramatic increase of the overwhelming debt load, which as of now constitutes 90% of the Ukrainian GDP. This means that Ukraine spends about 5% of its GDP only on the servicing of both domestic and international sovereign debts.

Experts expressed concern about the financing of the 2017 state budget deficit. Their concern is mainly related to the risk that cooperation with IMF will be suspended. The IMF program will remain dormant at least in the first half of the next year. This may endanger the country’s ability to service foreign debts and finance the current account deficit. The minimum foreign financing needed for 2017 is around USD 5 billion. Without these funds, it will be extremely difficult to maintain economic sustainability. Meanwhile, this may pose the risk of FX reserves exhaustion. Next year the economic growth will most likely be backed by export only. At the same time, possible imbalance in economy may spur social and political risks.